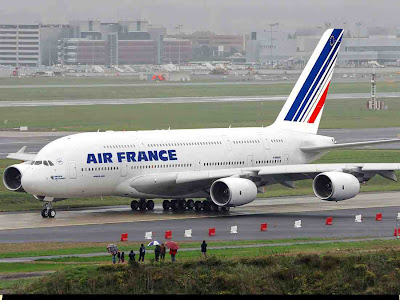 Photo by http://andrics.com/News
I don't know about you, but I am one of those people who may be late to many things, but not to the airport. Especially if I am traveling internationally, I like to get to the airport early enough so that I don't worry about long lines checking in or going through security. Flying for more than 10 hours straight is hard enough, so I don't need to add any extra stress to my traveling experience.


Well, for this trip I felt that I was quite prepared: I made sure we packed all the necessary items, we managed to pay our bills in advance, arranged for someone to look over our place, water the garden, pick up the mail.  We even arranged for a friend to take us to the airport. Ay, ay ay, that could have been the first major mishap. When we arrived to his place so that he could drive us to the airport, he announced that he needed to go to a quick job interview several miles away and not on the way to the airport. Aaagh! Even though both Martin and our friend assured me there would be enough time to get to the airport, I was freaking! We had printed out our boarding passes and that would save us a bit of time, but I was still nervous. Well, we ended up getting there on time and after all the stress, discovered
that our flight was delayed by an hour.
The plane was a two-story model so it took a while to get everyone on board. I was just worried we might not find place in the overhead for our carry-on. I hate it when after you make the time to pack things into a carry-on so that you don't have to wait at the carrousel, you end up having to check your bag anyway because there is no more room in the overhead compartment. Well, we didn't encounter that problem, but poor Martin had to sit next to a snobby, selfish guy who spread himself out and refused to share the armrest. I had the isle seat for which I was glad because I have a hard time sleeping on the plane and like to get up often and walk around to stretch my legs.

Waiting for the luggage at Charles de Gaulle airport

The most distressing part of this trip so far was that after finally arriving, transferring from one terminal to another at the Charles De Gaulle airport, and waiting for what seemed like hours for our luggage at the carrousel, my luggage did not turn up.  Then to add insult to injury, we had to wait at least another half hour to get to an agent and make a  lost luggage claim because there were several people in front of us waiting to do the same, some more angry than others. We were also stressed because Johan was supposed to pick us up and we couldn't call him to alert him of our situation and the poor lad must have been worried sick that we were so late and had to drive around and around since the parking situation at the airport is so difficult.
Well, I tried to keep my wits about me but was quite upset that my luggage did not appear.  And it's one thing where you live or stay near the airport, but we were driving from Paris to a small city in Belgium and it takes three hours to get there.  We couldn't sit there waiting to see if my luggage would appear so we left and I was uneasy knowing I had a lot of my essentials in that bag. I did have a couple of pairs of pants and two shirts in my carry-on. The airline gave me a little over night bag with essentials so I managed. 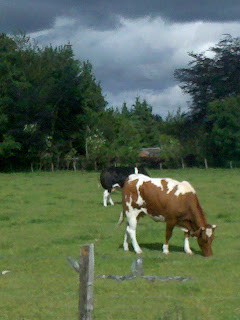 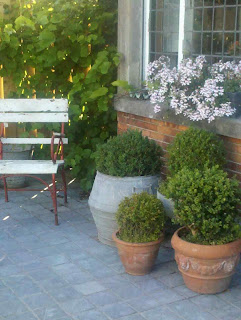 Outside Johan' s country cottage
I slept most of the way on the way to Belgium while Martin enjoyed the scenery and chatted with Johan and arrived three hours later at Johan's quaint new place in the country.  It is a beautiful place in a pastoral setting near Diksmuide next to our  warehouse.  Our friends Melissa and Bob were already there, having arrived the day before. Johan prepared us a delicious meal, several bottles of wine were corked and the lost luggage incident was forgotten for the moment.

Taking a stroll through the streets of Bruges
The next day, we all went to Brugge, walked around, enjoyed some Belgian beer, had a delicious meal, went on a little boat ride along the canals of "La petite Venice du Nord" and did not think about the luggage. 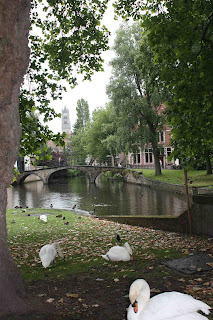 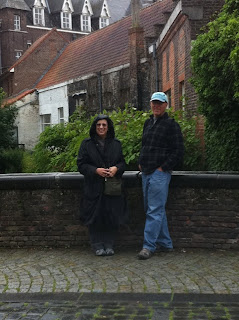 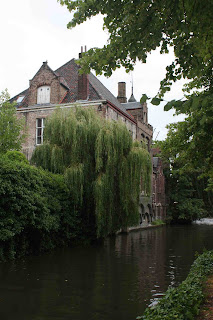 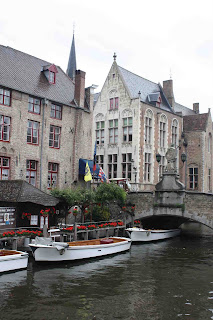 Melissa and Bob enjoying the sights in Bruges
Yesterday, while we were shopping at a village flea market in the North of France,(will be posting on this event later) we got a call to let us know they have my bag and will deliver it today.  By the time you read this post,(hopefully) I will have my bag and will be able to give our hosts; Johan and mother, their presents and use my own tooth brush instead of the cheap one the airline gave me! :)
Our next posting will be about our soaking-wet, but fruitful antiques hunting in a small village of the North of France.

Oh the frustration of airports - luckily the Brocantes have a strong pull! wishing you a happy unpacking of your suitcase, so that you can feel "home from home" and your own toothbrush on your birthday! greetings Col ~ Afrique du Sud

Hope you have a great time and enjoy your self out there friend. Thank you for sharing the pic's.....Julian

So glad to hear your toothbrush arrived! I can't live without mine so I know how you felt. Johan lives in my backyard? His place looks just like mine with those cows happy munching away but I don't have beautiful Bruges in the background...big sign of envy here. I can't wait to hear what treasures you unearthed..enjoy!

I'd have been sweating buckets too Trinidad if the person who was supposed to take me to the airport on a schedule told me they needed to go to a job interview first!! Grrrrrrrr!! And airports can drive you nuts! The best laid plans of mice and men go oft astray! Robert Burns must've been thinkin' "airports!" Lol! Can't wait to hear more about your trip! Vanna

Sooooo looking forward to hearing & seeing about your adventures at the Flea Market!!! AND Hope your luggage is now in hand!*!*!
Jeanine, ChiPPy!-SHaBBy!

I just hope this will not be one of those Murphy's Law experiences. No, my luggage has not been delivered yet and I may still not get it today. They called to say they could not get it to me yesterday but would come today. I told them it needs to be early because we leave for Amsterdam at 11 a.m. but they would not promise they can get it here that early. That's it! I'm going shopping and sending them the bill. :) The scary part is that it seems to be a pattern with Air France. When I was trying to track the status of my claim, I stumbled into a website where people post "lost luggage" horror stories and there was a lot about this airline. OK, enough about that, we are moving on. I will gather my photos and prepare the next installment where I share about our first market in Maroilles, France.
Thank you all for your comments.

Thank you for sharing your travels with us, though am sorry to hear of your lost/found luggage. :( It is your story though that gives me a glimpse of good food, drink, company, and flea marketing all rolled into one special journey through France!

Poor you! I have had similar travelling woes and it is so frustrating because it is entirely out of your control! However, judging from those gorgeous pics, the location more than makes up for all the headaches! All the photos you have taken look like they could be gorgeous paintings! How bucolic. Here's hoping that the rest of your trek is without worries.

Hi Trinidad,
Sorry about all the troubles you had to go through, but you're there, enjoy while you can, not everybody has the opportunity to go to France (that's me lol!) eat lots of cheese, drink wine, buy lots of antiques and take lots of pictures, can't wait for the next post.
XXXX Ido

Have a wonderful time in France!!

So glad that the challenges of travel are behind you and you are enjoying your travels.

Hope you have your clean underwear allready ;-)
See you tomorrow!

And the moral of this story is carry your own toothbrush! Lol. I have learned to carry one with me whenever I travel. Those freebie toothbrushes are awful. May as well scrub the fangs with a finger and baking soda.

The photos are beautiful as always Trino.

Atelier de Campagne
Corralitos, California, United States
Atelier de Campagne was created by the concerted efforts of Trinidad Castro and Johan de Meulenaere. When they first met about 15 years ago, they discovered that among their affinities, they both had a love for antiques and unique object d’art. Trinidad had a background in Art and Johan had a degree in Interior and Furniture Design. Years later, when Johan returned to his native Belgium, they decided to venture together and create an antique import business. Johan as the creative force in Europe, hunts for and gathers the one-of-a-kind mirrors, chandeliers, and pieces of furniture that they are known for, and also creates new treasures by “marrying” elements from old pieces of furniture with other artifacts, recycled wood, etc. Trinidad on this side of the Atlantic busied himself developing the business and building the clientele by participating in major gift shows, antique fairs, and tending to their store-front. In the summer they both travel through France selecting beauties to bring to the U.S. 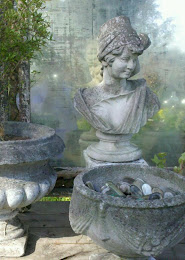 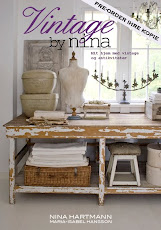 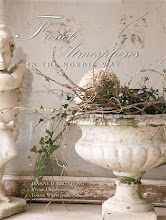 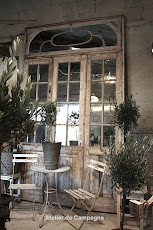 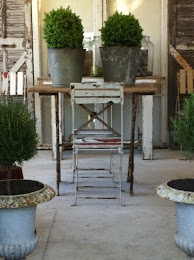 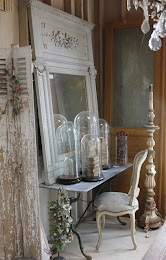 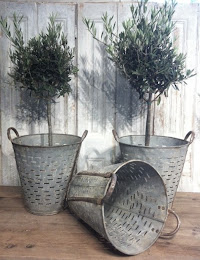 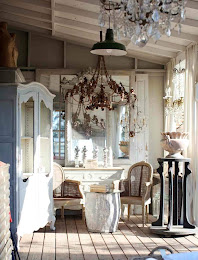 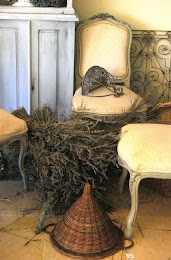 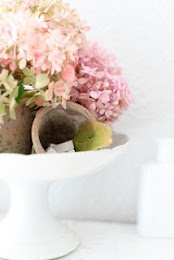 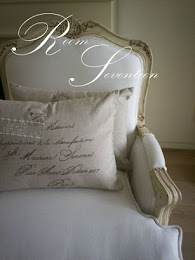 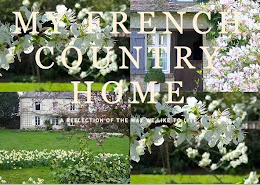 Going in the past